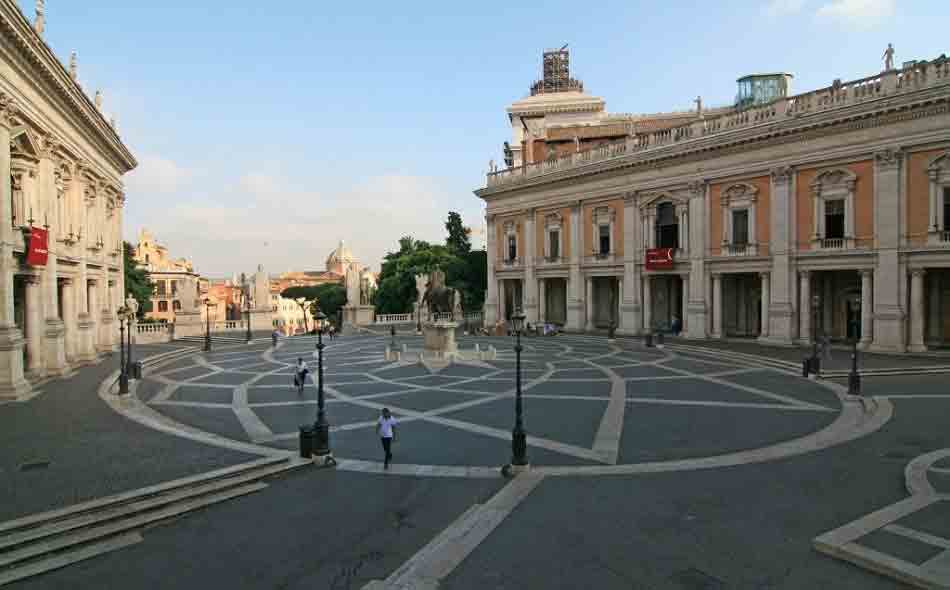 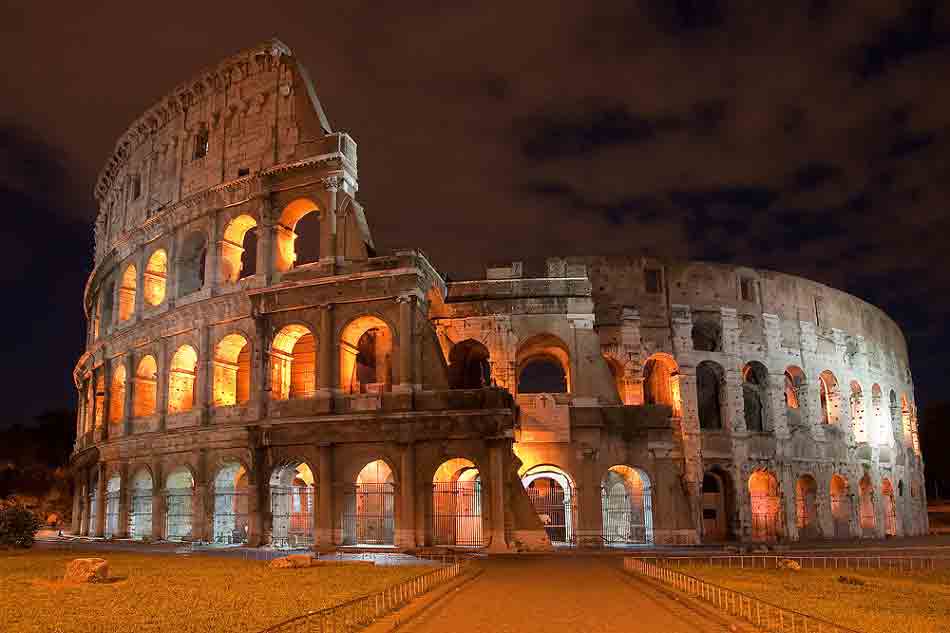 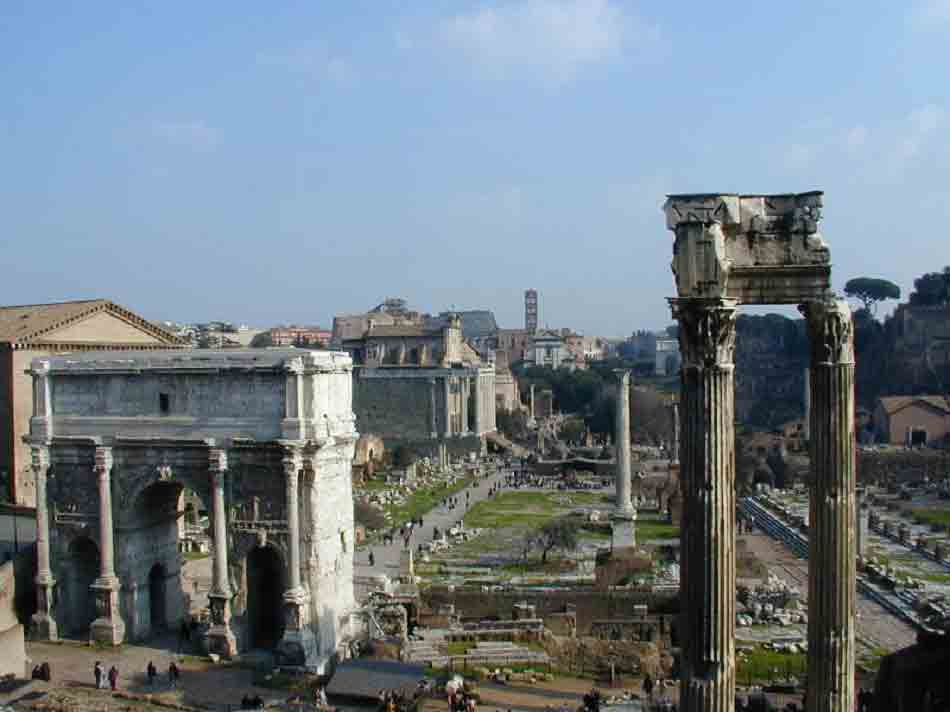 The Pantheon ("Temple of all the gods") is a building of ancient Rome, built as a temple to all the gods of Olympus. The inhabitants of Rome call it a friendly Rotonna, or Ritonna ("La Rotonda "), from which the name of the square. Was rebuilt by Emperor Hadrian between 118 and 128 AD, after the fire of 80 AD and 110 had damaged the previous construction of the Augustan age.

At the beginning of the seventh century, the Pantheon was converted into a Christian basilica, called Santa Maria della Rotonda, or Santa Maria ad Martyrs, which has allowed him to survive almost intact to the spoliation made ​​to the buildings of classical Rome by the popes.

The word Pantheon is in effect a loan greek that the Italian language has maintained through the Latin: in greek τό πάνθειον is an adjective meaning "the totality of the gods", and in most cases implies the noun ἱερόν ("temple"). So from the greek τό Πάνθειον (ἱερόν) ("The temple of all the gods") is derived the cast Latin Pantheon, used by Pliny the Elder, who delivered the word to the Italian language.

The Pantheon as a model

As the best preserved example of monumental Roman, the Pantheon has had enormous influence on European and American architects (one example, Andrea Palladio), from the Renaissance to the nineteenth century, with Neoclassicism. Numerous churches, halls, universities and public libraries echo its portico and cupola. There are many notable buildings influenced by the Pantheon in Italy we can remember the church cemetery of Staglieno Genoa, lachiesa of San Carlo al Corso in Milan, the Basilica of San Francesco di Paola in Naples, the Cisternone of Livorno and the Temple Canoviano Possagno, the Church of the Great Mother of God and the mausoleum of Bela Rosin in Turin, in the Anglo-Saxon countries the rotunda of the British Museum, the round of the University of Virginia Thomas Jefferson, the library of Columbia University, New York, the Jefferson Memorial in Washington DC and the library of the State of Victoria in Melbourne, Australia.

People interred at the Pantheon in Rome

Obelisk of the Pantheon

The Obelisk of the Pantheon is one of thirteen ancient obelisks of Rome, located in Piazza della Rotonda.

It was built at the time of Ramses II and brought to Rome by Domitian, which placed it as a decoration dell'Iseo Campensis (temple dedicated to the Egyptian goddess Isis) as well as the high statue of Minerva, to Dogali and the Boboli (now in Florence). It was found in 1373 at the Plaza de San Macuto (hence the name "obelisk Macuteo"), and then moved in front of the Pantheon in 1711 by Pope Clement XI and placed above the previous fountain by Giacomo Della Porta to by the architect Filippo Barigioni.

The Pantheon of Agrippa

The first Pantheon was built in 27-25 BC by Agrippa, friend and son of Augustus, in the context of the monuments in the Campus Martius, relying on the production Lucio Cocceio Aucto. It stood in fact among the Saepta Iulia and the Basilica of Neptune, blasted at the expense of the same Agrippa.

The original inscription of dedication of the building, shown on the subsequent reconstruction of the age of Hadrian, reads: M • AGRIPPA • L • F • COS • • TERTIVM FECIT (Marcus Agrippa, Lucii filius, consul tertium fecit) "Marcus Agrippa, son of Lucius, consul for the third time, built ", the third consulship of Agrippa since just the year 27 BC However, Cassius Dio Cocceianolo lists with the Basilica of Neptune and the Gymnasium Laconiano among the works of Agrippa in 25 BC ended

From the remains found at about 2.50 meters below the building at the end of the nineteenth century, we know that this first temple was rectangular (meters 43,76 x19, 82) with cell arranged transverse, wider than long (as the temple of Concord in the Roman Forum and the small temple on the Capitol Veiove), built in travertine blocks are covered with slabs of marble. The building was turned towards the south, in the opposite direction to the reconstruction of Hadrian, preceded by a portico on the long side which measured 21.26 meters in width. In front of it was an open area circular, a kind of square that separated the temple from the Basilica of Neptune, enclosed by a low wall in opus reticulatum and floor slabs of travertine. On top of these plates were then laid it other of marble, perhaps during the restoration Domitian.

The building of Agrippa had, however, the central axis of which coincided with the building's most recent and the width of the cell was equal to the inner diameter of the roundabout. The entire depth of the building Augustan also coincides with the depth of the pronaos Hadrian. From the sources we know that the capitals were made of bronze and that included the decoration of the pediment statues and caryatids. The temple faced onto a square (now occupied by the round Hadrian) limited on the side opposite the Basilica of Neptune.

Cocceiano Cassius Dio states that the "Pantheon" got his name because perhaps welcomed the statues of many gods, or more likely because the dome of the building drew the sky (and thus the seven planetary gods), and that the intention of Agrippa had been to create a place of dynastic cult, dedicated to the patron of the Gens Iulia (Mars and Venus), and where it was placed a statue of Augustus, from which the building would have derived the name. Having the emperor opposed to both, Agrippa had it placed inside a statue of the Divine Julius, (ie deified Caesar), and outside in the porch, one of Octavian and of itself, in celebration of their friendship and his zeal for the public good. The building was decorated by the neoattico Diogenes of Athens.

Destroyed by fire in 80, was restored under Domitian, but suffered a second destruction under Trajan.

Under Hadrian, the building was completely rebuilt. The brick stamps (trademarks yearly on the bricks) belong to the years 115-127, and it can be assumed that the temple was inaugurated by the Emperor during his stay in the capital between 125 and 128. According to the draft, drawn up immediately after the destruction of the previous building in the Trajan era, would be attributable to the architect Apollodorus of Damascus.

Compared with the previous building was inverted orientation, with north -facing. The large porch and the linking structure with the cell occupied the entire space of the previous temple, while the roundabout was built almost making it coincide with the square Augustan circular fenced dividing the Pantheon from the Basilica of Neptune. The temple was preceded by a colonnaded portico on three sides and paved with slabs of travertine.

The sources make us known a restoration under Antoninus Pius, while the inscription on the entablature of the forehead, reminiscent of other restorations under Septimius Severus (in 202), flow mostly marginal.

The building was saved from the destruction of the early Middle Ages because already in 608 the Byzantine emperor Phocas had made ​​a gift to Pope Boniface IV (608-615), who turned it into a Christian church in 609 under the name of Sancta Maria ad Martyrs, consecrating him with a solemn procession of clergy and people. The naming comes from anonymous relics of Christian martyrs who were transferred from the catacombs in the basement of the Pantheon.

"This marvelous temple, according to the common feeling, [...] you said Pantheon, because it was dedicated to all of them Gods imagined by Gentiles. At the top [...] were placed statues of Gods celestial models, and low in the land, being in the middle of Cybele, is in the bottom part, which is now covered by the floor, the statues were distributed models of the household gods. [...] Boniface IV. What nonsense to delete those, and filthy superstitions, Elder. 607. Removed of all falsehood gentilician, consagrollo to the true God in honor of SS. Virgin, and all the holy martyrs, so he carried away by varje 18 cemeteries. cartloads of bones of ss. Martyrs, and fecele place under the high altar, whence it was said s. Maria at Martyrs '

(Giuseppe Vasi, Route instructive to rediscover the ancient and modern magnificence of Rome, 1763)

It was the first case of a pagan temple transposed to Christian worship. This fact makes it the only building of ancient Rome to be remained virtually intact and uninterrupted use for religious purposes from the moment of its foundation.

The gilt bronze tiles that covered outside the dome were removed by order of Constantius II, Emperor of the East in 663 and replaced with a coverage of lead in 735. After the year 1000 the church took the name of Santa Maria Rotunda, from which comes the name of the square. Pope Eugene IV (1431 - 1447) had it restored, freeing also the shops that over the years had been built around. The bronze elements of the coverage of the pronaos, and perhaps also the sculptures of the pediment suffered in 1625, under Pope Urban VIII Barberini, the same fate of those golden under Constans II of Byzantium, and were merged by Bernini to create the majestic canopy on ' papal altar in St. Peter's. In the same period were added to the sides of the pediment two towers, designed by Gian Lorenzo Bernini since then been criticized very heated, soon known by the derogatory term " donkey ears " were eliminated in 1883.

Already in the fifteenth century, the Pantheon was enriched with frescoes, perhaps the best known is the Annunciation by Melozzo da Forlì, placed in the first chapel to the right of the entrance. The church was officially chosen as the seat of the Pontifical Distinguished Academy of Fine Arts and Literature of the Virtuosi al Pantheon, the academic side of the professional association of artists who would later become the National Academy of St Luke. Since the Renaissance the Pantheon, as in all churches, burials were made, particularly distinguished artists. Even today there are preserved, among others, the graves of the painters Raphael and Annibale Carracci, the architect Baldassare Peruzzi and composer Arcangelo Corelli.

A special mention must be made for the tombs of the kings of Italy: Vittorio Emanuele II, whose tomb is located adjacent to the fresco in the chapel of Melozzo, the son Umberto I and his wife Queen Margherita. These tombs are kept in order by volunteer organizations monarchist. The service honor guard is made ​​by the volunteers of the National Institute for the guard of honor to the real graves of the Pantheon. There is controversy on whether to bury the remains to the Pantheon of Vittorio Emanuele III and Umberto II because of the conduct of the Savoy in the aftermath of the First World War and during the Second World War.

The preservation of the Pantheon is at the expense of the Ministry of Heritage and Culture, but the building still remains a church where religious services are held regularly by the Canons of the Chapter of the Pantheon.

Legends and curiosities about the Pantheon

The Pantheon: the poetics of the absolute